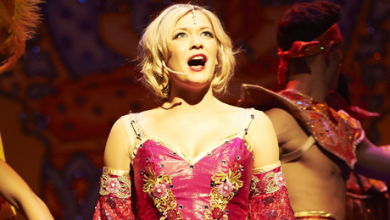 Suzanne is currently busy preparing for her role in the stage play About Miss Julie. The play runs from the 2nd-28th July at the Kings Head Theatre, London. For tickets see www.aboutmissjulie.com

2003
Toured the UK as Bobbie with the hit musical Summer Holiday.

Attends the Down With Love Premiere with Darren Day at the Kensington Odeon, London.

Appeared on the documentary At Home with the Love Rats with Darren Day on Sky1.

2004
Fell in love with co-star Darren Day during their time with Summer Holiday.

Appeared on the BBC’s The Keith Barret Show with Darren Day.

Gave birth to her son Corey Mackenzie Day on the 16th December.
Had a small role as Debbie Jennings in Channel 4's drama The Courtroom.

Attends the UK film premiere and after party of Kinky Boots the movie.

Appeared as the Narrator in the West End musical Joseph.

Attends The Wheels And Dollbaby Summer Party at The Embassy Club, London.

Attends the NSPCC Hall of Fame VIP Reception at the House of Commons.

Appeared on the ITV1 regression show Have I Been Here Before?

Starred in panto as Snow White at The Milton Keynes Theatre.

2006
Had a bit part in ITV1's The Bill as car crash victim Laura Mathews.
Co-starred as Janet in The Rocky Horror Picture Show UK tour.

Recorded vocals for Koishii & Hush on the hit dance track 'Calling' which charted in the UK and America.

2007
Became a panellist on Loose Women on ITV1.
First performed in The Vagina Monologues in Brighton.

Hosts the Jeans for Jeans fashion show at Harrods, London.

Attends the TV Quick And TV Choice Awards in London.

Signs up to appear in Jack and the Beanstalk at the Barbican Centre put pulls out just days before rehearsals are due to begin.

2008
Won Dancing on Ice on ITV1 and appeared in the UK follow up tour.

Attends the Opening of the London Toy Fair 2008.
Appeared on the ITV1 game show All Star Family Fortunes.
Was seen on ITV 1's quirky reality show The Baron although it was actually filmed in 2007.
Voted La Redoute’s Celebrity Mum of the year 2008 by the public.
Starred as Roxy in Chicago the hit West End musical.

Hosts the finals of Miss Scotland 2012 at Glasgow’s Princes Square.

Attends the Gala Opening of Never Forget, The Take That Musical at the Savoy Theatre, London.

Is nominated in the Best Takeover in a Role category at the What’s On Stage Theatregoers' Choice and attends the awards at the London Hippodrome.
Performed the theme tune 'Connected' from Barbie and The Diamond Castle children's movie.

Became the face of Michelle at George from Asda.
Won the ITV1 Dancing On Ice Christmas Special.

Launches the Disney Sing It game in Oxford Street, London.
Performed in the Dancing On Ice Tour for a 2nd year.

Attends the What’s On Stage Theatregoer’s awards at The Prince Of Wales Theatre with husband JK.
Toured the UK with The Vagina Monologues.
Appeared in the musical White Christmas at The Lowry Arts Centre, Manchester.

2010
Won the role of Eve Jenson on the ITV1 soap Emmerdale and appeared in over 100 episodes.

Attends the TV Choice awards at the Dorchester Hotel, London.

Is nominated for the Theatre Performer's Award at the Carl Allen Theatre Awards 2010.

Attends the British Soap Awards at the London Television Centre.

Attends the National Television Awards at the O2 Arena, London.
Attends The British Soap Awards at the Granada Studios, Manchester.

Starred as Cinderella at The Manchester Opera House.

Switches on the Christmas lights on albert square, Manchester.

Supports her friend Noel and attends the 10th anniversary of We Will Rock You in London’s West End.

Rocks out at the UK premiere of the Rock of Ages film.

Stars as Geraldine in the brand new west end play Baggage at the Arts Theatre, London. Her good friend Richard Mylan starred alongside her.

Launches Christmas shopping at the Broadmarsh Centre, Nottingham with a live event featuring a Christmas lights switch on and Santa’s grotto.

Suzanne stars as the genie in Aladdin at the Richmond Theatre, Surrey.

Switches on the Christmas lights in Richmond, Surrey.

Attends the Burn The Floor, Press Night after party at the Trafalgar Hotel, London.

Helps organise The Big Match charity football match and event in aid of The Brain Tumour Charity and Action For Children.

It’s announced that Suzanne will star as Cinderella again this year at The Bristol Hippodrome.

Attends the Reading Retail Awards at The Hilton Hotel in Reading with her new boyfriend Sam Greenfield.

Gives a speech in front of 250 people at the Executive PA Awards 2013 in her role as patron for The Brain Tumour Charity.

Appears on ITV1’s Big Star’s Little Star with her son Corey. They did amazingly well and won a whopping £15,000 for The Brain Tumour Charity.