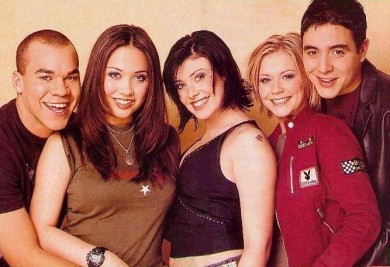 On the smash hit music reality show Popstars they beat off over 3000 other young hopefuls and won the chance of a lifetime. To get in to the band they had survived weeks of gruelling auditions and criticism from the shows judges Nicky Chapman, Paul Adams and 'Nasty' Nigel Lythgoe.

Following their selection the group was put into hiding and were groomed for stardom by a team of stylists, media experts and dance and singing teachers. After living and working in secret for months, the group was finally revealed to the world ready for a ferocious marketing and publicity campaign.

Things started off with a bang for the group with regular TV appearances and 1000’s of adoring fans wherever they went. Their first single, Pure and Simple flew straight in at number 1 and a number 1 debut album, Popstars soon followed. Hear’say mania swept the country and they soon became the nation’s sweethearts. The group were riding high on their success and were clearly enjoying their new found celebrity lifestyle. When their follow up single, The Way to Your Love also went straight in at number 1 it looked like the groups success was sealed. Their 36 date UK tour was a sell out and over 350,000 people saw the show.

During the tour the band recorded their 2nd album which was released in late 2001. The 1st single off the album, Everybody came in at a respectable number 4. The album with the same name didn’t do quite so well and only managed to get to number 24. It appeared that the nation’s obsession with hear’say was starting to disappear.

By late 2001 reports of cat fights and personality clashes were rife. Rumours that Kym was leaving the band began to surface and the future of the band looked bleak. Following weeks of speculation it was officially announced that Kym had left the group in January 2002. Kym claimed she left the group to spend more time with her children and to go solo on her own terms.

Following Kym’s departure the band decided to carry on and get a new member. Open auditions were held in London looking for a new star. Over 3 days of auditions Myleene, Suzanne, Noel and Danny saw 1000’s of singers hoping for a shot at the big time. When it was time to reveal the new member the press were in for a shock when it was a man and not a woman. The new boy Johnny, a backing dancer who happened to be going out with ex Steps star Lisa Scott Lee.

The press cried foul stating that the auditions were a fix and that Johnny was previously known to the group. In fact the band barely even knew Johnny and he had only danced for hear’say once in November 2001.

The new line up were determined to carry on as strong as ever and promised a new single and album. After several months of getting to know each other and spending time in Norway in the recording studio, they were ready to face the world again. Plenty of road shows, gigs and TV appearances followed and the group seemed to be back on form. Their first and only single with Johnny, Lovin’ is Easy was an up tempo club track that charted at a respectable number 6.

It looked that Johnny had saved the band but soon after hear’says popularity waned dramatically and the group soon became victims of mindless attacks and abuse. Despite promises of a second single with Johnny and a new album, it all became too much for them and the group sadly decided to split. Not all the members were entirely happy with the decision but they knew that they couldn’t carry on as they were. Hear’say was over.

The group all now have their own solo careers and the rest as they say is history!! 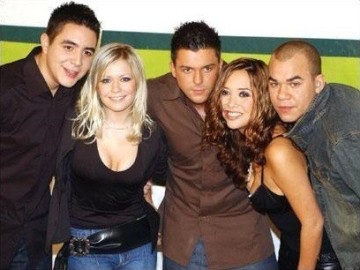