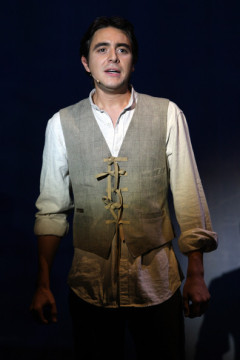 Noel is currently starring as Drew Boley in the UK tour of Rock of Ages the musical. For more info and tickets see www.rockofagesmusical.co.uk

Noel attends The Welsh Awards 2002 to pick up his Help a South Wales Child Award voted for by Red Dragon FM listeners. Noel also performed several tracks at the event.

2004
Continued his role as Nick in Fame at the Edinburgh Playhouse.
Performed at the Royal Gala opening of The Wales Millennium Centre.

2005
Appeared as Will in the touring production of the pop musical Love Shack.
Appeared on Channel Five's top reality show Trust Me I'm A Holiday Rep.

2006
Appeared with Sinitta in the brand new stage show What a feeling!

Attends The Carnival Choreographer's Ball at the Hammersmith Palais, London.

2007
Noel takes some time out and spends time with his family and friends.

2008
Hosted Simply Ballroom at the famous Golden Nuggett in Las Vegas, USA.
Toured with The 12 Irish Tenors Reno, USA.
Appeared as Nick Hurley in the touring production of Flashdance the musical.

Appears on ITV1’s GMTV to talk about his career and his time in hear’say.

2009
Starred as Danny in the West End production of Grease.
Appeared at The Latitude Festival in Terminal Four Play.
Toured the UK in the Yusuf Islam musical Moonshadow.

2010
Made a cameo in the smash hit comedy Gavin & Stacey on BBC1.
Sang with Jessica Cervi and Sarah O'Connor in Fame: The Musical for RTE One in Ireland.

2011
Appeared as Galileo in the UK Tour of the brand new stage show What A Feeling.
Recorded the Doctor Who Audiobook Beyond the Ultimate Adventure.

2012
Took over the lead role of Galileo in the west end production of We Will Rock You.

Performed at The Olivier Awards 2012 with the cast of We Will Rock You.

Noel opens the annual charity competition West End Eurovision with his We Will Rock You cast mates.

Noel performed alongside his We Will Rock You cast mates at the 2012 Travel Bulletin Awards.

Noel stars in his first pantomime as Aladdin alongside comedian Les Dennis at The Hawth Theatre, Crawley.

Noel shares the role of Tick/Mitzi with Jason Donovan in the UK tour of Priscilla Queen of the Desert the musical.