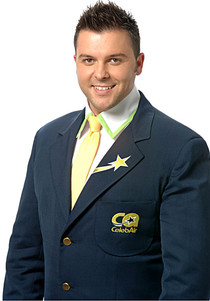 Johnny is currently working as a dance teacher and choreographer in the UK and Dubai. He has produced several stage shows, fashion shows and events for brands such as Next, Debenhams, House of Frasier, Harvey Nichols and La Senza.

2003
Johnny appeared as Prince Charming in Snow White at The Heath Theatre, Crawley.

Lisa and Johnny got married in a star studded ceremony in Sunninghill, Berkshire on the 14th August 2004. They celebrated in front of a host of celebrity guests including Lisa’s brothers (pop trio 3SL,) Pop Idol star Gareth Gates and Lisa’s ex Steps band mates Ian ‘H’ Watkins and Lee Latchford-Evans. As they arrived at the venue guests were serenaded by Johnny’s ex band mate Myleene Klass on the harp. They were also treated to a special performance by pop band Liberty X. Lisa said of the nuptials: Marrying Johnny was the happiest day of my life.’

Johnny appeared as a Hip Hopper and understudy for Greaseball in the Starlight Express the 3rd Dimension UK tour.

2005
Johnny and Lisa appear in their fly on the wall documentary series Totally Scott Lee on MTV.

2006
Appeared as Chuck Craston in the UK touring production of the musical Footloose.
Appears alongside Lisa on The Weakest Link Celebrity Couples Special and got voted out 4th.

2007
Resumed his role as Chuck Craston in the touring production of Footloose and then went with the production when it moved to The Novello theatre in London's West End.

Johnny and his wife Lisa appeared together in the ITV2 reality show Celebair. They were both sacked in a double elimination for abandoning their jobs and going clubbing.

2009
Johnny and Lisa's daughter Star Lily Shentall-Lee came into the world on the 24th September.

2010
Appeared as Prince Charming again this time alongside Lisa as Cinderella at The Royal Theatre, Windsor.

Signed for the Dubai based talent agency Bareface Entertainers.

Appeared as Jack alongside Lisa in Jack and the Beanstalk at The Derby Assembly Rooms.

Leads a Footloose dance workshop, teaching the original choreography of the musical at the MOVE IT 2013 dance event at London's Kensington Olympia.

The couple attend Royal Ascot for a second year this time visiting on day four.