My Review Of Funny Peculiar 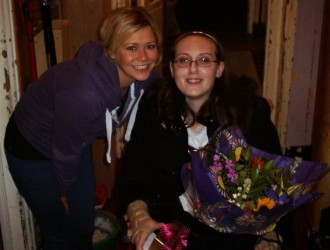 All day I was bubbling with excitement and anticipation as it had kindly been arranged for me to meet Suzanne Shaw backstage before the show. I have been a massive fan of Suzanne’s since her hear’say days and it was a dream of mine to meet her one day. We got to the theatre at the arranged time and went round to the stage door and explained that I was there to meet Suzanne. A minute or so later the man was back and opened the door for me to go in. As my dad was pushing my wheelchair down the ramp I looked up and Suzanne was standing there in front of me. Embarrassingly I immediately burst into tears as my dream finally came true. Suzanne was everything I expected her to be and more, beautiful, charming, modest and caring. As my parents and I were talking to Suzanne she suddenly said ‘do you want to meet Craig?’ (Craig Cazey) and went off to his dressing room and brought him out to me. He was very good looking and warned us that the play was very rude! I had brought a Funny Peculiar programme and poster to ask Suzanne to sign and Craig said that as the rest of the cast wasn’t there he would keep them and get them signed for me. I certainly didn’t expect to meet Craig as well and was just getting over the shock when Vicky Entwistle came through the stage door. I must say that Coronation Street didn’t do her any justice at all; she is very pretty in real life. We spoke with Vicky for a while and she explained that she had been sunburnt because of the amount of sun we have in Eastbourne. Everyone was getting ready for the show and props were being passed out to cast members so it was time to go. After getting a few photos’ with Suzanne, I gave her the flowers, card and chocolates I brought her and we left to go to the auditorium. 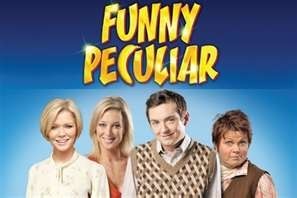 I was the first person there in a wheelchair so I got to pick the disabled seat with the best view. While we were waiting for the show to begin I was recovering from meeting Suzanne, I was shaking and couldn’t stop smiling! We were again warned by the theatre staff that the play was rude and only for over 16’s.

The play is set in the 70’s, just as free love and sexual freedom was beginning to become part of everyday people’s lives.  The mere idea of being unfaithful to their partner was enough to send housewives across the country running for the hills. It was written by playwright Mike Scott who sadly died of lung cancer in 2009. This tour has been made possible with the help and support of his beloved widow. He was clearly ahead of his time and his observations of the northern public are both tender and hilarious at times. 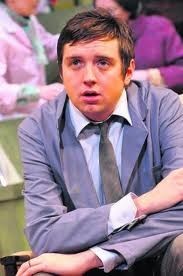 It starts with the suicide of the local Vicar (Dominic Cazenove) after he had come out as homosexual. This is the first sign to the community that times are changing. The play focuses around shopkeeper Trevor Tinsley, played hilariously by Coronation Street actor Craig Cazey and his adoring wife Irene, Dancing On Ice Star Suzanne Shaw. They make a very convincing couple and their situation is completely believable. Trevor is getting sexually frustrated and is yearning for what he calls ‘True Love’. He confronts Irene and explains that he wants to experiment but Irene is afraid of trying out new things. 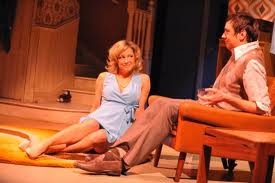 Unbeknown to Irene, Trevor meets new neighbour Shirley Smith, Eastenders/Hollyoaks star Gemma Bissix and arranges to deliver her shopping later that day. Trevor can’t resist the temptation and letting go of all his inhibitions he ends up sleeping with the sexy blonde. The fun doesn’t last long however as Shirley’s husband Eric (Sam Nicholl) returns home. In his panic Trevor grabs his clothes and jumps out of the window stark naked. It’s at this point all the girls get a thrill as we see Craig Cazey naked, full frontal and everything! 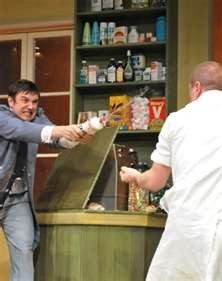 Inevitably Irene finds out about Trevor’s infidelity when the local busybody, Mrs Baldry, Coronation Street star Vicky Entwistle turns up to give her all the gory details. Trevor has the whole community looking down on him and clearly starts to lose his mind. Here comes the messiest scene of the play where Trevor and baker Desmond (Simon Naylor) have a food fight, throwing cream buns and bread rolls at each other. We girls also get another cheeky treat when we catch a glimpse of Simon Naylor’s bum when Trevor pulls his trousers down. This leads to the important question, who has the best bum Craig? or Simon? 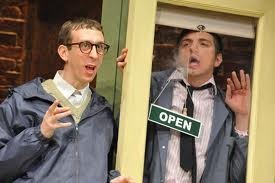 After the fight Irene apologises to Trevor for not meeting his needs which leads to a row and Trevor walks out on his wife. In the following scenes, Irene is seen crying her heart out on the shop floor and the scene is played beautifully by Suzanne. It was heart breaking to watch and I must admit I fought back tears (I wasn’t the only one). Trevor sneaks back into the house in the middle of the night and is confronted by Mrs Baldry and her simple son Stanley, sympathetically played by Heartbeat star Steven Blakeley. Now knowing that Trevor isn’t monogamous Mrs Baldry tries her luck and in a comic scene, turns her attention to Trevor. After a somewhat awkward exchange involving a disturbing strip tease Trevor ends up slipping on a toad and falling down the stairs to the cellar. Mrs Baldry, in a state of pure confusion is seen having a mental breakdown on stage, which is brilliantly portrayed by Vicky Entwistle. 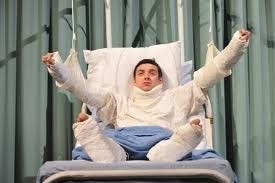 We next see Trevor in hospital with multiple broken bones and a bruised ego. He gets a shock when Irene turns up by his bedside in a posh suit with a new hairdo. She too has found her sexual freedom after going round to Shirley and Eric’s and reveals that she has slept with both off them! Trevor is shocked at his wives new found pizazz and in one of the funniest scenes of the night Irene gives him a blow job under the bed covers. The show ends with policeman (Mark Heal) telling the group that Mrs Baldry is ok and is allowed to go home. Then in perhaps the saddest scene of the night he tells them that Stanley is being put into an institution as Mrs Baldry is no longer fit to look after him. In a sad but true fact of our lives in the 70’s, the news is accepted by the group as ok. 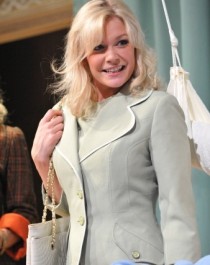 The play was very well acted by the whole cast and the set is very cleverly designed. It is full of northern humour and will have you laughing out loud in several places. Everyone around where I was sitting clearly enjoyed it and were chucking along the whole way through. After the show I went back round to the stage door to collect my programme and poster. On the way round I saw Gemma Bissix rushing out of the theatre and shouted ‘you were brilliant’ at her! Then as we were going down the street I suddenly saw Suzanne running down the street towards me. She gave me a massive hug and I told her how great she was in the play. She thanked me again for the gifts and promised to keep in touch. I then saw Craig again outside the stage door; he gave me a big hug as well and asked me if I had enjoyed it. I had an amazing night and I will never ever forget it. Meeting Suzanne has given me fantastic memories to cherish forever and meeting Craig, Vicky and Gemma was an absolute pleasure.